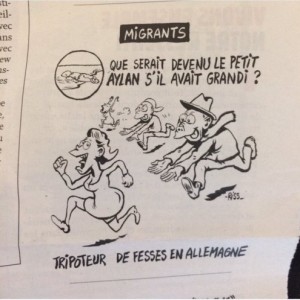 Last week, media was filled with solemn commemorations of the Charlie Hebdo (CH) massacre in January 2015. The “Je suis Charlie” crap was everywhere & everybody dropped a tear–let’s be frank, mostly & quite suitably in sarcasm. Though even now, every time a criticism gets posted about CH, some rush like Knights Templar to champion free speech, pontificate on the iconoclastic character of satire, & sermonize about blasphemy not deserving massacre.

Let’s do a little pontificating of our own in response to the latest so-called satirical cartoon from CH (in this photo) about Aylan Kurdi, the drowned 3-year-old Syrian boy whose body washed up on a beach in Turkey last September. The caption reads: “What would little Aylan have grown up to be? An ass groper in Germany.” It is of course intended as a satirical response to the sexual assaults in Cologne, Germany on New Year’s Eve which involved some refugees as well as others & are still being investigated.

There’s actually no need for pontificating or excoriating. The debauchery of this cartoon, which does not in any way address the crime of sexually assaulting women, speaks for itself. This rubbish was published now at a time when far-right, nationalist, anti-Muslim vigilante groups like Pegida are going on a rampage across Germany protesting immigration, demanding Germany stop accepting refugees, & assaulting Pakistani, Syrian, & other refugee men. That’s not satire but incitement to criminal violence. How can critical minds be confused?

Allow me to speak personally here. My posts about Betty Windsor are intended as sarcastic, caustic take-downs of British moochocracy, which I despise. Some have misunderstood my posts as open field on Betty & posted degrading images of her on my timeline–which I delete. Degrading her is not my schtick. I draw a line even in ridiculing the power elite–though I don’t mind having a go at her consort for flatulence or at Kissinger because he’s such a vile reptile.

Even in satire, some things are sacred. Satire can be vulgar, outrageous, iconoclastic; it can treat things with contempt. But it cannot disregard limits & transgress the boundaries of social hatred; it cannot feed violence & nationalism because then it morphs from satire into propaganda for the status quo. It becomes hate-mongering.

If there is one thing in society that we hold sacred, it is children, & if there is one thing we respect, it is the horror of losing children, especially in a violent way. Little Aylan’s father is still grieving his loss–& so are we. It is absolutely odious & contemptible that CH would think it could mock this little boy. But in mocking him, they only expose their satire as nothing more than sucking up to power, as kissing ass on a grand scale. That makes them worthy subjects of satire. But most of us just want them to go away.