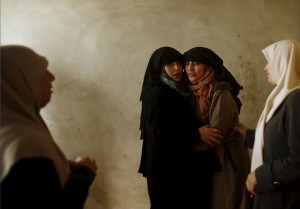 This photo from the Guardian-UK was captioned: “Relatives of Palestinian militant Mussa Zeater, who was killed in an attack by an Israeli aircraft, mourn during his funeral.” A few other media sources also posted photos from his funeral. But when you try to find out who Zeater was & what happened, there is only one mangled report by TeleSur & not a peep more from the Guardian which thought it worthy of a photo.

The TeleSur report has to be un-mangled for coherence so the best that can be discerned is that Palestinian medics claim Zeater was a civilian while Israeli military officials claim he was part of a “terrorist cell” trying to plant a bomb “at a northern beach” one kilometer (less than a mile) from the apartheid fence with Israel.

The circumstances of his assassination remain incomprehensible (including where that northern beach is) but three other Palestinians were injured in the aerial attack. From shrapnel fire or the same bomb? Were they part of that “terrorist cell”, just passersby, or farmers working their fields? TeleSUR says “Witnesses told Ma’an News that Israeli vehicles & bulldozers arrived before the strike & razed the border area.” So did the bulldozers raze the area while Zeater was allegedly planting the bomb? Or was he still just thinking about doing it while eating lunch but they knew he’d soon be coming along with the bomb & wanted to ready the area to bomb him to death? Or is the whole story a stinking pile of horse manure?

The type of Israeli aircraft used to kill Zeater is not identified but was likely a drone since Israel pioneered the use of drones for assassinations in Gaza & has used them for over a decade. Day & night, it flies thousands of surveillance & attack drones over Gaza–traumatizing the population who cannot tell whether they are just surveilling or seeking a target to bomb.

No one knows for sure how many Palestinians in Gaza have been killed by drone attacks but human rights & health officials estimate victims in the several hundreds, with nearly 80% of the victims children. Fatality statistics do not include the immense human psychological suffering caused by the steady barrage of drones flying overhead at all hours of the day. Military officials are blowing smoke when they claim drone attacks are precision, “targeted killings” without “collateral damage” since there is plenty of testimony to the opposite–especially from Gaza.

Israeli drone practices are blanketed in secrecy–just like the US Pentagon which under Obama uses thousands of drone assaults for assassination & in war. The US use of drones has increased exponentially under Obama. Only Israel, the US & UK have used drones both in combat & in places like Gaza which is not a war front. It should be reported that Israel is the world’s top manufacturer of drones & sells them to over 70 countries.

One question that emerges from all this is why the US Pentagon is sending billions of dollars of military equipment to Israel when it manufactures & sells billions to other countries? Who can keep up with the lies?

The only way to support Palestinians against such treachery is to demand no aid of any kind to Israel & to build the economic, cultural, & academic boycott (BDS) of Israel. Buy nothing with a barcode beginning 729.

Our condolences to the family & friends of Mussa Zeater. May he RIP.