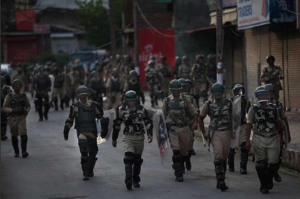 It turns out the Indian army never intended to stop the use of pellet munitions in Kashmir. On August 15th, army officials recommended to a government panel that pellet guns be replaced with less lethal options like PAVA grenades which they euphemistically call chill shells. They didn’t make that recommendation because they were disturbed by the number of teens & small children disfigured, disabled, & blinded by pellet guns. That’s exactly what recommends those weapons to the Indian army.

The Indian army made that recommendation in response to a July 25th legal action in the Jammu & Kashmir High Court when a division bench of the court criticized the use of pellet weapons as unjustified & asked the Indian government to review their use. A division bench in the Indian legal system is a hearing by at least two judges in preparation for possible adjudication before the full court.

On July 30th, just after the division bench action by the J & K High Court, the Kashmir High Court Bar Association filed a Public-Interest Litigation (PIL) asking the court to ban the use of pellet guns in Kashmir.

The August 15th recommendation by Indian army officials that pellet guns be replaced was a public relations stunt, an end-run maneuver against the court action. We know that because five days later, on August 20th, the Indian army filed an affidavit in response to the PIL claiming pellet munitions were necessary in “extreme situations” or the army would have no recourse but to open fire with live ammunition which would cause more fatalities. India has been using live ammunition against unarmed protesters for decades. If they thought they could replace pellet guns with live ammunition, they would not hesitate. The advantage of pellets to the Indian army is that victims are not fatalities but only disfigured & disabled, which is much easier for international media to justify.

According to the Indian army, standard operating procedure (SOP) for using weapons against unarmed protesters is to fire below the waist. But they argue the situation in Kashmir is so volatile they’ve been forced to aim above the waist. Of course, when they aim above the waist, it is to disfigure protesters & includes the faces & eyes to disable & blind permanently so as to behead Kashmiri resistance to occupation. But to expose how insane this entire discussion about pellet munitions is, we should ask how incapacitating a person’s legs or damaging or shooting off their genitals can be considered acceptable military procedure when in civilized societies it is called barbarism? Is the CIA torture manual now setting the standards for military procedure?

Indian army officials cry crocodile tears over the soldiers struck & injured by rocks. Just like Israeli soldiers do. Do they really want to make jackasses of themselves before the world by arguing that rocks are equal to tanks & armored vehicles, sniper rifles, submachine guns, pellet guns, truncheons, tear gas & sound grenades? Tell the soldiers to call home to mama for consolation. It won’t be forthcoming from anyone with half a brain or not deranged by nationalism.

What makes the situation in Kashmir so volatile is the presence of 700,000 Indian troops armed to the teeth with every kind of lethal & so-called non-lethal weapon against defenseless protesters. That is a ratio of one soldier to every Kashmiri man, woman, & child.

On this 59th day of the siege, 74 Kashmiris have been killed, between 8,000 & 10,000 have been injured, 700, including mostly teenagers but also small children, have been struck in the face & eyes with pellet guns & at least 60 of those completely blinded.