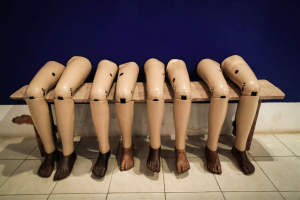 Emancipation US-style: these leg prostheses are on display at the
Cooperative Orthotic & Prosthetic Enterprise (COPE) Center in Vientiane, Laos. The COPE facility is similar to the prosthetic clinic in Kabul, Afghanistan where hundreds are admitted monthly for amputations sustained in US bombing & from the millions of land mines all over the urban & rural landscape going back to the Soviet occupation.

The Vietnam War (1955 to 1975), involved US military intervention & bombing in Laos & Cambodia. During the secret military operation in Laos between 1964 & 1975, it is estimated US bombers flew 580,000 bombing missions & dropped between 270 million & 300 million cluster bombs–or about 2.5 million tons of munitions just in Laos.

It is estimated that one-third of nearly 300 million cluster bombs failed to detonate, leaving Laos contaminated with millions of unexploded ordnance (UXO). Since 1975, more than 20,000 people have been killed or injured by UXO explosions in Laos. Sixty-percent of the incidents resulted in death, 40-percent of them children.

The US Pentagon spent $13.3 million (in 2013 dollars) every day for nine years bombing Laos but between 1993 & 2016 estimated US contributions for UXO clearance range between $2.5 million & $5 million per year. The discrepancy amounts to several billion dollars between the cost of dropping bombs & the cost of clearing them after the war.

The abysmal situation of unexploded ordnance prevails in Vietnam (along with Agent Orange & napalm contamination which still contribute to debilitating & disfiguring birth defects), in Cambodia, & of course in several other countries.

The UXO catastrophe in Laos is making TV & print news probably because Laos is hosting ASEAN Summits this week–as if diplomacy can defy the legacy of war.