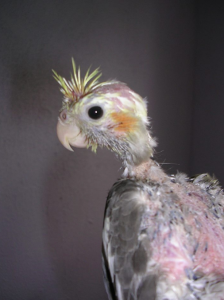 Tessie-Rex is a 3 &1/2-year-old cockatiel born in my stove drawer. To prevent reproduction, I had closed down everything where her mother Zoe could possibly lay eggs. But Zoe, who’s smart enough to go to college, entered the drawer from the rear of the stove & laid Tessie.

One day leaving the house, I stepped around Zoe playing on the floor who in panic moved under my foot. She was injured when I stepped on her & traumatized & would have been more so if I tried to catch her. So I let nature take its course & she recovered, except for being permanently bald on one side of her head. She abandoned Tessie during her recovery period. I took over feeding & during that time moved to a new place. After the move, Zoe began again to feed & care for Tessie but she plucked her bare & only stopped when Tessie fought back.

Tessie came of age to be a feisty, kind of loner little girl. Birds group & she was left without companionship so she spends a lot of time on my shoulder–though I’m not allowed to pet her.

Last night the birds had a night fright where something set them off in a panic. It takes a while to find them all & calm them & poor little Tessie was particularly overwrought. I actually thought she’d injured a leg so had to catch her to check. One of the dogs then entered the room & tried to attack Tessie. She had to be unceremoniously locked out but left Tessie in a state of terror.

She was overwhelmed & not injured but today is like a little rag doll, completely despondent. So I’m debating whether to catch her unawares & medicate her with a homeopathic remedy for trauma or let her be to recover like Zoe.

Whatever fool said animals have no emotions & no soul never spent a moment caring for them. Their emotional lives seem as profound as our own.

This is a July 2013 photo of Tessie at about 3-months old when her mother was plucking her.