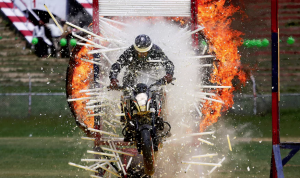 The Guardian-UK newspaper has really gone over to the dark side of news reporting–most noticeably about the Palestinian & Kashmiri struggles for self-determination. Their photojournalism now focuses on moments in sports, religious rituals & festivals portrayed anthropologically, & even donkey races in Italy.

But this photo may take the cake for cynicism & corruption. They’ve hardly covered the military siege in Kashmir, particularly the extremes of violence against unarmed protesters. But they published this photo today with the caption “Srinagar, India: A policeman rides through a wall of fluorescent tubes during India’s Independence Day celebrations.”

The photo is a contemptuous slap in the face to Kashmiris who in their thousands are facing down Indian troops armed with curfews, checkpoints, surveillance, pellet guns, live ammo, & tear gas in their struggle for independence from India.