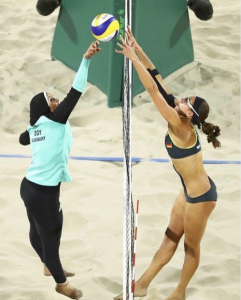 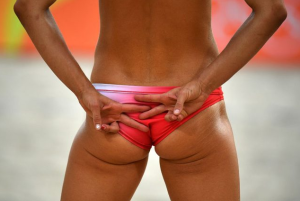 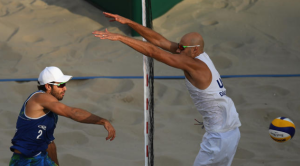 So while some are pontificating about how at odds the burkini is with Enlightenment values, female liberation, & the summer heat, many of us are rushing to the stores to buy one. Shaming us with war propaganda from the Pentagon will not deter us from finding comfort at the beach.

Meanwhile, those so up-in-arms about the burkini are missing all the action at the Olympic games in Rio over the attire of the women’s volleyball teams. Women’s attire at sports events has long been noticeably scantier & more sexualized than men’s attire. This is particularly evident in the uniforms of women’s beach volleyball teams which are tiny bras & bikini bottoms exposing half the women’s asses. Women’s objections to the differences are not prudery but rather to sexploitation that promotes exhibitionism in women as sexual freedom & sexualizes women athletes in order to attract commercial contracts.

Olympic uniforms are dictated by the international sports federations (FIVB for beach volleyball, FIG for gymnastics, FINA for swimming, etc.) so people can bark on about the hijab as a coercive style & women’s right to wear what they want but for the most part, elite women athletes do not choose what uniforms they will compete in.

When beach volleyball became an Olympic event in 1996, the beach volleyball federation (FIVB) mandated women’s uniform as a skimpy bikini less than six inches wide with the option to wear a body suit underneath in cold weather or for modesty purposes. FIVB introduced bikinis intentionally to highlight sexual attributes rather than athletic prowess & not for practical or performance-enhancing reasons. Otherwise, why are male beach volleyball players uniformed in baggy shorts & shirts?

As a result of pressure, in 2012, FIVB modified their uniform requirements to allow women players to wear shorts & sleeved tops. The Australian Sports Commission (part of the Australian government) published a fact sheet on sexploitation in women’s sports & were particularly cogent in their objections to the sexualized image of women athletes.

Reportedly, many women beach volleyball players prefer the bikini to shorts & shirts. Condemnations of FIVB regulations do not include excoriating the women athletes who don’t recognize the problem or who actually do prefer playing ball in a bikini–especially because there’s plenty of sponsorship money involved for them.
But where are those so up-in-arms about the exploitation of the burqa & hijab? If women’s freedom of choice is so important to them, why aren’t they going ballistic about athletic federations mandating sexualized uniforms? Do they perhaps think the bikini is a symbol of women’s liberation? Who are they to decide? Are they only concerned about the freedom of Muslim women because they think Muslim women are too stupid or oppressed to choose their attire all by themselves?

The distinction between governments or sports federations that mandate women’s attire & the right of women to choose what they wear for religious, cultural, or fashion reasons is not subtle. What women wear is nobody’s damn business but the women themselves.

Photo on top (by Lucy Nicholson/Reuters) is Egypt’s Doaa Elghobashy (L) & Germany’s Kira Walkenhorst during the women’s beach volleyball qualifying match in Rio de Janeiro on August 7, 2016. Germany won by 2-0. So do those two points prove that bikinis are more performance-enhancing than burkinis?

Photo in middle is uniform of women’s volleyball federation (by Getty Images). You don’t have to be a feminist or blue-nosed to consider it inappropriate attire in an international venue.