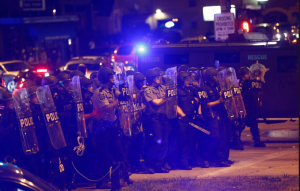 There really isn’t a coherent report yet on the shooting of 23-year-old Sylville Smith by Milwaukee police on Saturday night. But when the sheriff & media don’t detail how a routine traffic stop led to his death & instead report his previous arrest record, they’re pulling a bait & switch–especially when most of his 13 arrests were for things like shop lifting, speeding, driving without insurance & with a suspended license, or having booze in the car. Those are the dumb things youth without money do & hardly rise to the level of criminality.

The sheriff said Smith had a bunch of drug arrests, a robbery charge, & was accused of a felony last year but if he was not found guilty in a court of law for any of these, it is not relevant to his shooting but only to character assassination. You can’t just summarily execute people because they do naughty things or even criminal things.
It’s also not relevant to keep reporting that he was shot by a Black officer. Many of the cases of Blacks being shot involve Black officers. It’s not a matter of personal racism but of social policy. Under the Obama administration, violence against Black youth & their incarceration rate has not improved an iota from the Clinton administration.

What’s relevant is how a traffic violation led to the shooting death of a 23-year-old man. What’s relevant is that his shooting caused such an extreme reaction in the Black community–almost certainly because of seething resentments not just at aggressive policing in their neighborhoods but at the entire nexus of discrimination & oppression including unemployment, underemployment, segregated education, segregated housing, indignities, injustices, humiliations of every kind.

An analysis of the violence against the Black community cannot end with hating on the police who are only the front lines of this sustained assault. The war on the Black community comes from the highest reaches of power in this country–that is, all the way to the White House & the Department of Justice, both now led by Blacks. When those institutions are again led by whites, the policies will not change because the oppression of Blacks is systemic & institutionalized–though it is suffered personally.

Racism is so built into the system that modern capitalism couldn’t operate without it. The fight against racist persecution strikes at the very heart of inequality & is understood by the powers that be as a direct challenge to their ability to play one section of working people off against another.

Our fullest solidarity with the Black community in Milwaukee.
Photo is phalanx of riot police lined up against protesters yesterday in Milwaukee.