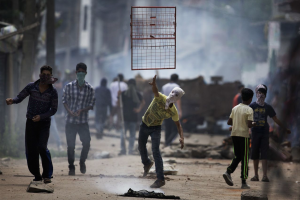 Meanwhile media reports India is considering non-lethal weapons to replace non-lethal pellet munitions that have disabled, disfigured, & blinded at least 12 teenagers & kids every day for the 55 days of this siege. Why doesn’t the Indian army stop using it immediately if they know it’s doing such harm? And what about that live ammo? What’s so non-lethal about that?

The only reason the NY Times, the Washington Post, & other media are reporting about this is because Indian military barbarism in Kashmir stands exposed by activists on social media. Media are inventing a counter-narrative to make the Modi regime & the occupation appear less violent & malignant when in fact maximum harm to young people is the very intent of all lethal & so-called non-lethal weapons used in Kashmir against unarmed protesters.