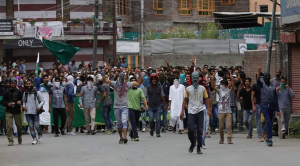 In response to international outrage over pellet injuries in Kashmir, the Indian government has approved PAVA grenades as an alternative to pellet guns–although it is not certain the Indian army will cease using pellet munitions since they’ve proven so effective in disabling & blinding.

PAVA projectiles will injure people in several ways: grenades often kill when they strike someone in the head or chest; PAVA chemicals incapacitate & paralyze so that many will suffer broken bones & other injuries from falling or being trampled in a crowd trying to escape attack; PAVA chemicals are toxic & will harm those with respiratory & skin issues; the chilli pepper ingredient primarily affects eyes & causes extreme pain, as if exposed to scalding heat.

The entire discussion about non-lethal weapons to oppress Kashmiris is being conducted in media as if it was rational instead of completely insane & barbaric. No weapons used against unarmed protesters are non-lethal. None are justified.

Photo is protesters in Baramulla on day 55 of the siege when 300 were injured by those non-lethal weapons & live ammo.

India get the hell out of Kashmir. End the occupation. Self-determination for Kashmir.

(Photo from Freedom for Kashmir.)