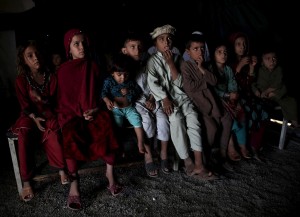 Emancipation US-style: these little kids are watching an outdoor movie in Kabul, Afghanistan. Is it a scary moment in a Harry Potter film? Is that what makes them such a somber audience? In fact, it’s a UN educational video about how to avoid landmines as part of a UN ‘awareness-raising program’. The kids are refugees, most likely born in Pakistan, returning with their parents being deported & routed out by Pakistani authorities.

The UN refugee agency (UNHCR) has been cooperating with Pakistani authorities to “incentivize the return of refugees” by giving a USD $150 cash stipend when they return to Afghanistan. This is supposed to cover transportation from Pakistan to Afghanistan & “basic items of immediate need” like food stuffs, cooking oil, a cooking utensil & blanket. (Presumably, at that rate, they’re traveling back on a donkey.) To make sure the refugees don’t take advantage of such largesse, the UNHCR gathers biometric data like fingerprints before they leave Pakistan. You wouldn’t want any thieves coming back for a second round of chump change.

Since the UN incentivizing program is so puny, the Pakistani government was forced to supplement & resort to bulldozing their homes & deporting them back to a war zone. Most refugees don’t want to move back to Afghanistan because the US is still bombing. But the US State Department considers the UN program ‘generally effective’ in providing “reintegration assistance” to thousands of refugees though it does admit that ” long-term solutions for returnees remains significantly challenging.” No kidding!?

Those significant challenges include no housing, no jobs, no medical services, no schools, the US-NATO war, & a landmine count of 10 million covering farm lands, grazing areas, roads, footpaths, residential areas, urban & rural areas. Landmines kill or maim an estimated twelve people each day in Afghanistan & almost 50 percent die due to lack of medical facilities. Afghanistan is also now rated as 171 out of 173 countries in terms of poverty. Child labor is ubiquitous. Fourteen years of US-emancipation & this is what you get. Along with that beauty salon in Kabul–so when your legs are blown off by a landmine, at least your nails are done.

The great tragedy of the present era is the weakness of the international antiwar movement. The people of Afghanistan cannot be expected to stand alone against the behemoth of lies & the US-NATO war machine. Nothing is more imperative than re-building that movement to demand “US-NATO out of Afghanistan!”

Our deepest apologies & our fullest solidarity to the people of Afghanistan–& our commitment to do what we can to re-build antiwar opposition to the devastation of your country.