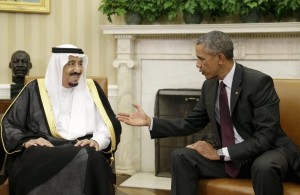 Cluster munitions are explosives that eject hundreds of smaller munitions on impact. They were first used by Nazi Germany in WWII but are now banned under international agreements–agreements Saudi Arabia & the US refuse to sign. The cluster bombs supplied to the Saudi military by the US Pentagon are designed to kill civilians, destroy vehicles & infrastructure, disperse chemical & biological weapons, & scatter land mines.

The Arab uprisings terrified the Pentagon & US rulers & they will stop at nothing to reverse them. No barbarism is beyond their capabilities or willingness to employ because a democratic Middle East is a threat to US hegemony & control. That’s why US allies are the feudal tyrants & military juntas.

There is no more imperative political responsibility than to re-build the international antiwar movement before the US & its feudal & military allies have turned the Middle East into a killing field.