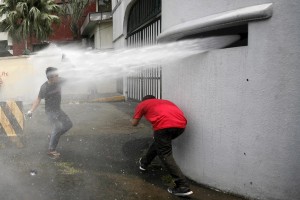 There’s something particularly admirable about the intransigence of the Filipino antiwar movement. Not a single representative of US militarism shows up in their limousine caravans without antiwar protesters responding with effigies & mass protests against the re-militarization of the Philippines, the role of the US government in bankrolling that, & joint military war games between the US & Filipino military.

Filipinos paid a mighty price for the Vietnam War by their government hosting US military naval & air bases. And now in its competition with China, the US is re-engaging the Filipino regime–the same regime forcibly evicting thousands from their farmlands for agribusiness plantations & from urban slums to gentrify. And not just to gentrify to make the country suitable for well-heeled tourists but for hosting the entourage of diplomats & military operatives that come along with US military bases. Kabul & Baghdad redux.

Here a protester is doused by a water cannon as he hurls a paint bomb at the headquarters of the Filipino military in Quezon City, a part of Manila that is the heart of the slum evictions.

The rest of the world should not just admire the Filipino antiwar movement but emulate its intransigence.