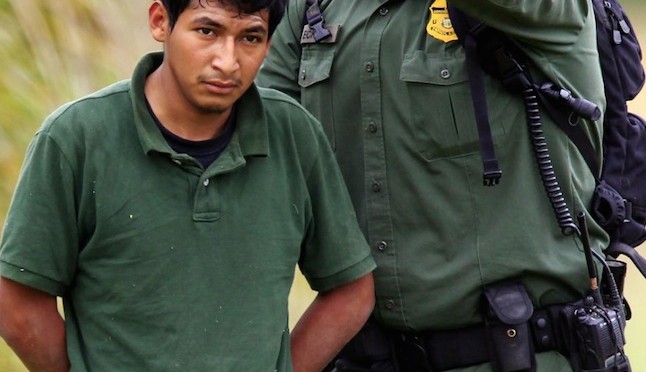 This is another immigrant arrested yesterday along with 79 others in McAllen, Texas. Media reports the border patrol “swooped” in on their encampment, handcuffed them, & took them off to detention before deportation. Swooping is a thing fully-armed US cops do to scare the hell out of people. Is such machista peculiar to US cops or do the rest of you also have to suffer this crap? This guy is a US Border Patrol but Texas Rangers have a machista style all their own, including never removing their foolish 10-gallon hats, even when they’re using the loo or making love. That’s why their divorce rate is so high. Nobody can tolerate them, least of all their spouses.

This young man doesn’t seem to be impressed with all the machista. But he must be very scared & uncertain of his fate. Our fullest solidarity with him since it is scary as hell to get caught up in an unjust & rotten judicial system, pickled to its gills in racism. We aren’t told this man’s name or his country of origin. We don’t give a damn where he’s from. He’s one of ours, he’s a brother. Our land is his land. Open the borders!

Immigration is a human right!