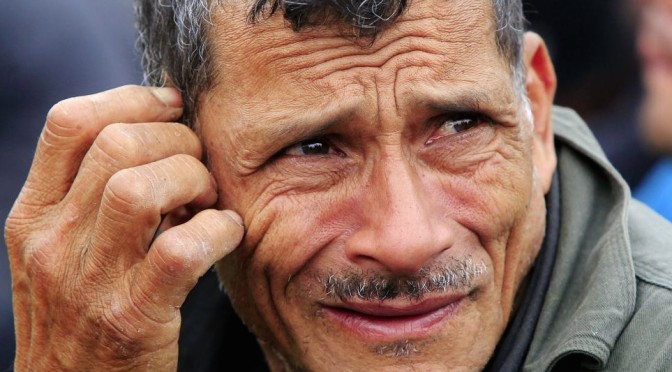 This man is Everado Sanchez, an undocumented immigrant from Honduras who was arrested yesterday near here with 79 other immigrants from Honduras, El Salvador, & Guatemala. Most of them traveled nearly 2,000 miles, some paid thousands of dollars, & most have gone through unspeakable suffering to find work in the US. Many have come to locate or reunite with family members.

US immigration arrested 132 others this week in a location just miles from where the others were found. They were living in what is called a stash house until their transportation further north past border patrol stations on the highway could be arranged. Senor Sanchez & the others were living in the scrub under tents camouflaged by cacti & mesquite trees, sleeping on cardboard, & with little food or water for at least a week. After being arrested, they were all handcuffed & herded on to buses as though they were criminals.

All in all, the US border patrol boasts of over 154,000 arrests last year in this part of Texas–mostly immigrants coming from Central America, & thousands of them unaccompanied minors. Most of the children will be stuck in detention centers, including abandoned military bases; most of the adults will be dumped back in Mexico to fend for themselves. Every morning you can see border patrol buses dropping them off on the Mexican side of the bridges. Most of them have exhausted their resources for survival & wouldn’t be coming here if they could find work in Mexico or in their home countries. Many will attempt to cross the Rio Grande again but on their own, without “coyotes” to guide them. If they are picked up a second time, the border patrol will simply dump them further south in Mexico.

This is barbarism. If neoliberal plunder, including US corporations, were not laying waste to their livelihoods they would not be forced to leave their families & cultures to move here. The grief on Senor Sanchez’s face says everything we need to know about US immigration policy. Let it be damned! And let us do our utmost to join with immigrants in demanding the US open the damn borders. This land is our land; this land is their land. Immigration is a human right!