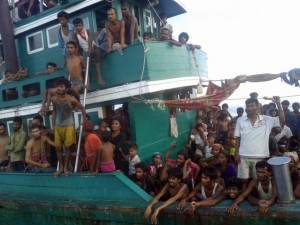 While tens of thousands of immigrants continue to cross the Mediterranean Sea for refuge in Europe, another immigrant crisis is developing in the Andaman Sea where refugees from Bangladesh & Rohingya from Myanmar flee south to Thailand, Malaysia, & Indonesia. The Rohingya are fleeing state-sanctioned persecution & violence; the Bangladeshi from poverty & unemployment. Many Rohingya fleeing pogroms in Myanmar attempted for years to enter refugee camps in Bangladesh but increasingly were turned away. Now Rohingya boarding boats in the Bay of Bengal are joined by Bangladeshis running from poverty.

After giving sanctuary to under 2,000 immigrants, the Thai, Malaysian, & Indonesian navies are turning boats away from their harbors & setting them adrift. According to human rights organizations, most have been on the boats for over two months, many are close to death, all are without food or water, & have no idea how to navigate a boat or where to go. There are now an estimated 6,000 to 8,000 adrift in the Andaman Sea. Many of the immigrants set adrift reported they want to move on to Australia so it’s likely the Australian regime is up to its eyeballs in this treachery.

While their navies set thousands of immigrants adrift, Thai, Malaysian, & Indonesian politicians try to justify this unspeakable treachery before the world–proving thereby that politicians are as ruthless & stupid in those countries as they are in the US & Europe. They claim they’re already hosting tens of thousands of immigrants & haven’t the resources for more. And quite frankly, under neoliberalism they have a point. The unsolvable problems of the barbaric phase of capitalism are erupting beyond national borders causing millions around the world to flee–not just for a better life, but to survive. No single country can solve the problems created by massive inequality, widespread poverty, war, & persecution. That’s what internationalism is all about.

That doesn’t for one moment mean regimes can turn their backs on immigrants like they were trash to be dumped or drowned without mercy. When refugees coming knocking by land or by sea, it is the duty of civilized human beings to open the borders & provide refuge. Refuge may not mean accommodations like the Taj Mahal but it does mean a place to stay, food to eat, & a chance to forge a new life.

Several of the politicians from Thailand, Malaysia, & Indonesia are talking about the need to pressure Myanmar to respect the human & political rights of Rohingya. Well that’s a really important thing to do so it would be useful to know first, why they haven’t done it in their own countries for their own citizens as well as immigrants, & second, why they haven’t already put pressure on Myanmar since persecution of Rohingya has gone on for decades.

The photo is Rohingya, including small children, on a drifting boat off Thailand. Immigration is a human right! Open the damn borders!