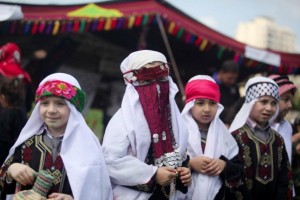 The dishonest media coverage of Palestine can really exhaust the adrenalin unless we compare the mangled reports of today with the dead silence of thirty or forty years ago when the Exodus narrative about Israel was riding high. Palestinians commemorate Nakba (meaning “Catastrophe” in Arabic) Day annually on May 15th–the day after Israeli Independence Day according to the Gregorian calendar (though Israel celebrates the latter in April according to the Hebrew calendar). The Palestinian commemoration of Nakba Day never made the news while Israeli Independence Day made the headlines.

The creation of Israel was based on the forcible & violent dispossession & expulsion of Palestinians. Hundreds of Palestinian villages were emptied, thousands massacred, & 700,000 driven into exile between 1947 & 1950. Nakba Day isn’t just a historic commemoration since there are now six million Palestinians living in refugee camps & Israel continues ethnic cleansing while it recruits Jews from all over Kingdom Come to become citizens of their military encampment.

The Guardian-UK caption to this photo published today is of the mangled kind. It said in Gaza City “Palestinian children take part in a march before commemorations of the birth of the state of Israel 67 years ago in British-mandate Palestine, which led to the displacement of hundreds of thousands of Palestinians.” Couldn’t they find a more coherent way to phrase that? Couldn’t they bring themselves to say the word “nakba”? Or does clarity not serve mythology for the creation of Israel?

The Guardian knows full well the term nakba resonates for Palestinians as shoah, a term for the holocaust, does for Jews. That’s why in 2009 the Israeli education ministry ordered the removal of the word nakba from textbooks for Israeli Palestinian schoolchildren. It’s an attempt to switch the narrative from the catastrophe of nakba to the Zionist myth of a triumphal return from diaspora. What Israel commemorates as a war of independence was in truth colonialism & the ethnic cleansing of Palestinians, a barbarous event in human history which continues unabated.

The resolute & historic struggle of Palestinians & the international growth & impact of the economic & cultural boycott of Israel (BDS) confronts the lies of 67 years of Zionist colonialism. BDS has made all the difference. Commemorate Nakba Day tomorrow & build the hell out of BDS.