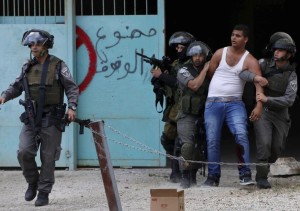 This photo is Israeli border policemen arresting a wounded Palestinian protester. His inside pants leg appears to be saturated with blood suggesting he needs an ambulance, not a paddy wagon. Witnesses said he was shot by troops during a protest in the West Bank city of Bethlehem on the eve of Nakba Day commemorations.

In the past, there have been provocations & assaults on Palestinians during Nakba Day protests. There have been shootings, with injuries & deaths from live fire; protesters sprayed with “skunk” waste water.