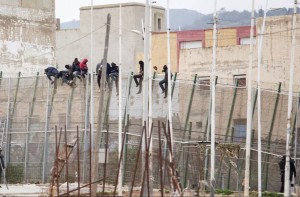 Morocco plays the same role in immigration to European Union countries as Mexico plays in Central American immigration to the US: as a southern flank of repressive immigration policy. Yesterday, Morocco announced it would take “all due measures” to dismantle camps where thousands of African immigrants live while waiting for a chance to scale the fence into the Spanish territories of Melilla or Ceuta. They already frequently attack & attempt to destroy the camps but since immigrants have no place else to go, they just wait the cops out & move back.

The announcement must have set off a panic & today 600 immigrants attempted to storm the 20-foot (six-meter) fence at two different times in two different locations. You can’t see it in this photo but a small phalanx of Spanish riot cops are confronting them below. The ladders are not there to facilitate their entry into Spain without injury but to facilitate attacking the immigrants & deporting them on the spot in violation of international asylum laws. Thirty-five actually managed entry despite police assaults but five were injured including two with broken legs who need to be hospitalized.

The massive increase in immigration from African countries to Europe parallels that from Central America to the US. Neoliberal predation must be putting millions of people under such acute economic, political, & social pressure that they are forced to take perilous measures. There isn’t much reporting on how most African immigrants get to the Mediterranean area but if it’s anything like the trek from Central America to the US border, it’s a horror show–or worse. In 2013, there were 38 attempts to rush the fence at Melilla; 3,000 managed to get into Spain. In 2014, an estimated 16,000 immigrants made 65 rush attempts; about 5,000 got into Spain where they can lay claim to asylum rights under international, Spanish, & European Union laws & possibly move on to live & work in Europe.

Spain’s new security law targets immigrants & Spain is beefing up the border with more riot cops so they can beat entrants back & deport them on the spot without answering to their own damn laws. The Spanish government sleazes out of the laws by claiming the undocumented arrivals are social & economic immigrants, not refugees & asylum seekers. This is a distinction contrived in some think tank to deny millions the human right to move to, live, & work wherever the hell they want on this planet. It’s a distinction of no value–or as the French so eloquently put it, it’s “merde.”

The working people of Spain who are being thrown out of their jobs & out in the streets in mass evictions have much more in common with these immigrants than with the boneheads who run Spain & Europe or with that useless moochocracy who strut around the palace in phony military uniforms. When immigrant’s rights & struggles are linked to those of Europe’s working people there will be a new day dawning.