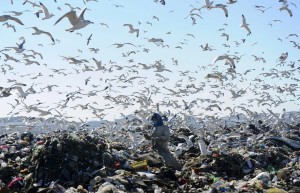 It would be a whole lot easier to change the world if you could tell the difference between capitalism & socialism, if there was a place you could point to that stood for economic, political, & social equality. China ain’t that place. It’s trying to pull off some kind of magic trick–a combination of capitalism & socialism–but in the end it all comes out to barbarism.

This landfill in China is a case in point, where migrant workers compete with elderly & unemployed in scavenging as a means to survive. Most scavengers around the world earn between one or two US bucks a day. Chump change. A few reports however claim a scavenger in China can earn up to $16 bucks just for one old cell phone & that one old woman actually became a millionaire from scavenging. What do you bet those reporters are smoking dope or getting their information from questionable sources like the Politburo of China?

It’s a country of nearly 1.5 billion people & it’s estimated each produces about 2,000 pounds of household waste a year. That’s another iffy estimate since it’s more than Americans produce with considerably greater discretionary income. There is also massive industrial waste that has prompted thousands of protests across China in the past several years. The government stopped releasing annual protest statistics after the annual number surpassed 100,000 over several issues, including most prominently, environmental issues & land grabs. One staggering figure from a Chinese professor is there were 180,000 protests just in 2010. You can see why the government tried to block news on the mainland about the Hong Kong democracy protests.

Some articles attribute the waste problem to “wanton waste disposal” & explain that while the government tries to regulate recycling there is a low level of environmental awareness. When all else fails & your investigative powers aren’t up to snuff, blame the people. Why not? That’s what capitalism does.

In fact, since 2007 about 300 Chinese companies do a brisk multibillion-dollar business in importing & disposing of US & European waste including plastic bottles, cardboard, scrap paper, scrap metal, electronics, appliances, & almost anything else they can stuff in those shipping containers. In one recent year, the US sold almost $11 billion & 16 million tons worth of scrap to China. China imports nearly half of US recycled plastics, around $500 million worth. That doesn’t include what they’re hauling in from Europe. The land grabs are probably necessary to accommodate mountain ranges of waste.

In the past few years, almost certainly in response to massive environmental protests, China began Operation Green Fence to enforce higher standards for the waste they would accept. What do you bet the reform is all on paper & effects actual practice very little? So that medical waste & dirty diapers come along in the same container as the computers & cell phones full of toxic metals. Again, that’s what capitalism would do.