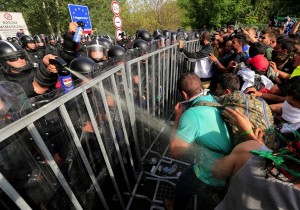 CBS news showed live footage tonight of phalanxes of Hungarian riot police charging refugees, including women & children. They beat on them & used water cannons, tear gas & pepper spray against them, requiring many including small children to receive medical care. This photo shows a riot cop spraying pepper spray directly into someone’s face. When a similar incident happened at the University of California during student protests in 2011, it went viral & people went ballistic because of its utter & gratuitous viciousness.

The reporter was assured by medical personnel that the children would recover from tear gas exposure but research in fact links both tear gas & pepper spray to serious illness & even death. The Chemical Weapons Convention (CWC) prohibits both tear gas & pepper spray in warfare for a reason but they are still considered legitimate in repressive policing. Of course no CWC ban is going to deter the US Pentagon from using illegal chemicals nor Israel which used white phosphorus on the people of Gaza.

Unfortunately we know from almost daily exposure to tear gas & pepper spray against the uprisings in Bahrain, Egypt, & Palestine that serious health problems are associated with these chemical agents, especially for those with respiratory problems. Some of the health problems include coughing, shortness of breath, other lung-related disorders, delayed menses, miscarriages, stillbirths, heart & liver damage. And that doesn’t even count the extreme psychological trauma children experience being attacked by groups of riot cops.

The photos show the refugees–who must be starving, exhausted, & stressed to the max–protesting & fighting back against the outrageous human rights crimes being committed against them. It is not irrelevant that before Assad’s bombing, US covert intervention, & ISIS turned Syria into a killing field, there was a revolutionary movement against the the Assad regime which many of these refugees may have participated in.

Neoliberalism, the barbaric phase of capitalism, is in profound international crisis. It is driven to countless wars by inexorable pressures & conflicts but it is not equipped to deal with the carnage it leaves in its wake. Actually, they don’t give a rat’s ass about the human suffering they create. We saw that in the Greek austerity program imposed on the backs of working people, with pensioners taking it in the jugular, & we see it now with their callous barbarism against desperate refugees.

Immigration is a human right & we need to shout “Open the borders!” from the rooftops. But the most important political responsibility of our era is to re-build the international antiwar movement to stay the hand of barbarism & militarism.