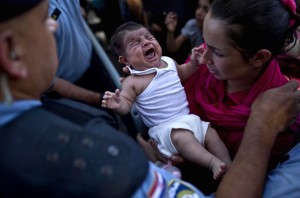 The refugee crisis–now referred to in some media as “migrant & refugee” crisis–on the Hungarian border has become something of an Armageddon scenario. Thousands of refugees are confronted now by razor wire barriers, water cannons, tear gas & pepper spray, & Hungarian special forces.

Yesterday the Croatian government agreed to open their borders saying they lacked capacity to register refugees except women & children but would allow refugees to transit through to northern Europe. Hungarian riot police helped refugees board buses to Croatia, dividing women & children from men so that already deeply traumatized people are now separated from their families.

Today, Croatia re-sealed its eight road border crossings after thousands of desperate refugees pushed through police cordons to enter–& of course in such panic & chaos, many fell, were trampled & injured. An estimated 2,000 people were stuck for hours in blazing heat at the train station in Tovarnik, Croatia waiting for transportation to refugee centers. The only heartening part of the story is the Croatian volunteers who set up tables at the station to feed the refugees.

Croatia is now not just directing refugees back to the Hungarian border but is busing them back where they will again be confronted with violence. If this isn’t a confrontation between good & evil, then what is it?

There are now many photos like this of crying infants & children. The chaos, tension, & violence must overwhelm their nervous systems in ways that cause permanent harm. This woman & child are at the Tovarnik station.

We need to do more than have welcome rallies for the refugees; we need to march to the Hungarian border by the millions & demand they end the barbarism. And we need to take those barbarous governments down that do not serve human needs & rights but flout them along with the highest achievements of human civilization.