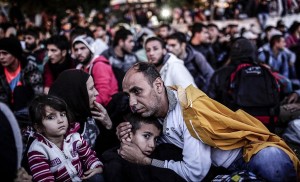 There haven’t been previous reports of the reactionary Turkish regime harassing refugees passing through the country on their way to Europe. There have been reports about Afghan & other refugees working temporarily in Turkey on their journey. So CBS reports that Turkish coast guard boats are now attacking refugee boats crossing the Aegean Sea are very disturbing. Today we read that the refugees in this photo have been waiting at the Istanbul bus terminal for two days because authorities are withholding tickets to Turkish-Greek border towns where they can cross.

No one expects the reactionary regime of president Erdoğan to champion refugee rights but mostly refugees are transiting through Turkey. So why this crackdown?

For many years Turkey, the second largest military force in NATO, has campaigned to become part of the European Union. Their membership bid is a major controversy opposed by influential political forces–including those who write rubbish like: “Turkey is not a mature European-style democracy.” Of course it isn’t democratic; it’s extremely repressive. But which “mature” European democracies are they talking about? France which persecutes Muslims for wearing a veil & evicts & deports Roma? Greece which is making pensioners homeless? Spain which is evicting thousands to privatize public housing & no longer allows public protests? Or England run by a feudal monarch?

In May, Erdoğan gave a speech promoting Turkey’s EU membership. He said “The EU needs Turkey more than ever,” arguing that the EU & Turkey need to act together in the face of growing regional threats. “Regional threats” like immigration?

The way realpolitik works, even before the barbarism of neoliberal capitalism, is trade-offs, back-room deals, devil’s bargains at the expense of working people. It’s such a pervasive method of operating that politicians pride themselves on artful manipulation & treachery. They call it diplomacy.

So is it cynical to suggest that Turkey’s aggression against refugees is a quid pro quo bid for EU membership?

Hopefully the continuing democracy movement in Turkey will link their struggles with that of refugees & demand “Turkey out of NATO,” & “Immigration is a human right; open the borders.”