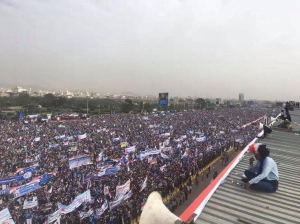 For those who have long-since written postmortems on the Arab Spring uprisings, this was the scene in Sana’a, Yemen today where the entire range of political forces (including Houthi rebels & supporters of Ali Abdullah Saleh, the dictator ousted in 2012 by the revolution) united against the US & UK-backed Saudi war.

Consider the scale of opposition after nearly two & a-half years sustaining carpet bombing & a naval blockade since March 2015. Over 12,000 people have been killed & 70-percent of of the country’s 27 million people are in need of food, humanitarian & medical care for the worst cholera outbreak in the world.

Long live the Yemeni revolution against dictatorship.
US, UK, Saudi-led coalition out of Yemen. Stop the bombing.