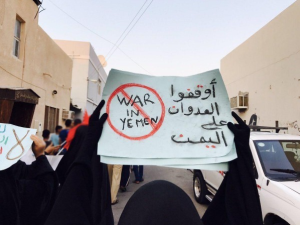 Despite massive political repression, hundreds of Bahrainis from several villages took to the streets last Friday (August 18th) with placards & chants condemning the US & UK-backed, Saudi-led war on Yemen & demanding it be ended. The antiwar movement is not dead nor is the Arab Spring. The intransigence of Bahrainis, Yemenis, Syrians against dictatorship, war, & aerial bombardment must be reproduced in those countries supplying & dropping the bombs.

Long live the Bahraini revolution. US, UK, Saudi-led coalition out of Yemen. Stop the bombing.

(Photo of protest in one village from AhlulBayt News Agency)