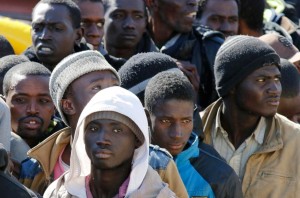 These are some of the young men who survived the horrific crossing from Libya to the island of Lampedusa where there is an immigrant processing center. The survivors are from the Ivory Coast, Senegal, Gambia, Niger, Mali, & Mauritania, according to a UN immigration agency. They didn’t just survive the crossing but unlike 29 of their fellow countrymen, they survived the rescue by the Italian coast guard who use boats too small to accommodate people below deck.

The death of 29 immigrants rescued by the coast guard & forced to stay on upper decks in brutal weather for 18 hours has to be among the most horrific human rights crimes ever committed under EU immigration policy.

None of the damn officials from Italy, the EU, or the UN look anything but criminally stupid, incompetent, & vicious. But there are those in this otherwise bleak story who stand out for having some humanity. And not for the first time. In October 2013, when a boat carrying 364 immigrants mostly from Eritrea, Somalia, & Ghana sank off the coast of Lampedusa, local fishermen blew the whistle on the the Italian coast guard for intentionally bungling the rescue. When the Italian government moved the bodies of the drowned to Sicily for burial in scattered, unmarked graves, survivors were unable to attend the memorial service or hold funerals for their own loved ones. Residents of Lampedusa joined human rights activists, survivors of the accident, & detainees at the Lampedusa refugee center in protest.

Lampedusa’s mayor, Giusi Nicolini, has more than once publicly criticized the EU & Italian government for their immigration policies, including comparing them to organized crime & asserting that none of them cares if immigrants live or die.

These young survivors have just been put through hell & what’s remarkable to note is the air of defiance & dignity they still hold. Unless we rally to their defense as brothers & sisters, we should hang our heads in shame.

Immigration is a human right! No ifs, ands, or buts.