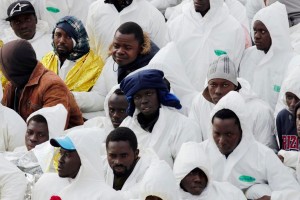 Monstrous crimes are being committed against millions of undocumented immigrants around the world, crimes so barbarous that those responsible need to be prosecuted & exiled to some remote island & denied contact with animal or human civilization. Nothing could be more horrific than the treatment immigrants from Africa, Syria, Palestine, & elsewhere receive trying to enter Europe through the Mediterranean Sea. In the past two decades, a staggering estimate of 25,000 African immigrants have drowned trying to cross. If we want to know the weight racism carries in immigration policy, that estimate alone speaks volumes of condemnation.

They enter from different routes up & down the north African coast, mostly traveling in rafts & overcrowded boats, hoping to get a toehold in Europe. There are women, infants & children, elderly, not just young men. The trauma they endure must create massive PTSD, life-long psychological loss & grief. But that means nothing to the European Union & its component regimes who employ the most expensive & up-to-date surveillance equipment in the world to keep them out.

Many of these drownings are mass in just one crossing: 365, 700, 500, 200 people die in one incident & this horror goes on year after year. Several days ago 330 people drowned trying to get to the island of Lampedusa off the coast of Tunisia where there is a refugee processing center. Media explains this atrocity by the conflict between Italy & the European Union over who is responsible for search & rescue. Of course, if human life was the primary concern both would have fleets out there & they’d have ferries transporting immigrants with dignity.

Another scapegoat alibi is blaming “human traffickers,” those who help immigrants cross. There’s no question some are predatory & in it for the dough, but many are former immigrants providing a service. The occupation wouldn’t even exist if the human rights of immigrants were honored by opening up the damn borders.

Perhaps one of the most ignominious crimes was on February 9th, when 29 immigrants died from hypothermia after being picked up by an Italian coast guard vessel from an inflatable boat that went adrift. Hypothermia is a gruesome, terrifying way to die. They had spent 18 hours on the decks of the boat taking them to Lampedusa in rough seas & high winds. Is the Italian coast guard that stupid & inept or is it more likely executing EU immigration policy with a criminal reckless disregard for human life?

Working people have a vested interest in defending the human rights of immigrants & demanding the borders be opened up. Racism compounds the crimes against African immigrants but as we know from the IMF-EU austerity programs, especially in the poorer European countries ringing the Mediterranean, they hold European workers in no more esteem than they do immigrants. We need to choose our allies wisely. We need to oppose those criminal regimes & stand with immigrants as brothers & sisters. Period.

Take a look at these young men rescued from the same boats where the 330 died & 29 froze to death. Horror is written in every single one of those faces. Justice demands we respond by saying, Immigration is a human right! Open the damn borders! Down with Fortress Europe! And let’s start looking for a suitable island where the criminally insane who run this world can contemplate their crimes against humanity for all eternity.