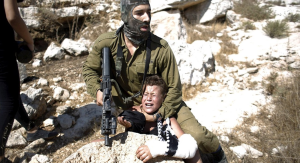 Laura Loomer is a rightwing grandstander making herself a spectacle with Islamophobic, Zionist, & racist stunts. She calls herself a journalist in the same way Eva Bartlett, Vanessa Beeley, & Abby Martin do: by singing for their supper.

It’s usually best to ignore her but in this day & age when Trump has made demento all the fashion sometimes you have to answer her. In response to reports that Israeli police murdered three Palestinians at Al Aqsa mosque in occupied East Jerusalem, she tweeted: “There 👏🏻 Is👏🏻 No👏🏻 Such👏🏻 Thing 👏🏻As 👏🏻A 👏🏻Palestinian👏🏻.”

Just so Loomer knows what a Palestinian looks like, we found this photo taken in the occupied West Bank. It’s from August 2015 but it’s iconic of how you know a Palestinian when you see one. The Palestinian is the boy with the broken arm being brutalized by an Israeli soldier. That’s the easiest way to identify a Palestinian. They’re the ones being brutalized & the ones resisting occupation. Just so she can’t claim we didn’t tell her.

Photo is a Tamimi boy. His family, well-known for resistance to occupation, came to rescue him from the soldier & dished out some brutalizing of their own. Held up as an object of scorn before the world, the soldier took leave & went crying home to mama.