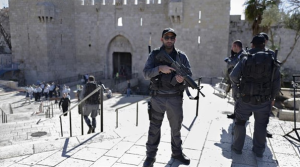 What actually happened isn’t really clear since media reports conflict & video of the event isn’t easy to forensically interpret. What we do know is that East Jerusalem is Palestinian territory illegally occupied by the Israeli army which conducts constant provocations against Palestinians & impedes their freedom to worship at Al Aqsa. Israeli soldiers & police guard tours of rightwing evangelical Zionist tourists from the US & Israeli extremists through the mosque compound while restricting access to Palestinians for prayer services.

It is always ritually claimed that Al Aqsa mosque compound is a sacred site to both Jews & Muslims. That is utter nonsense, a fabrication of Zionist ideologues attempting to establish a historic claim to Palestine, including all of the Muslim holy sites, based on the Old Testament. That is analogous to an Irish-American laying claim to a cathedral in the Rhineland from whence her ancestors came over three thousand years ago.

Maybe the three young men were armed. Maybe they weren’t. They could have been carrying Muslim prayer beads instead of weapons & still could have been shot & had weapons planted on them as they lay dying.

The Israeli army has no right to be in East Jerusalem, no right to occupy & desecrate the Al Aqsa mosque, & no right to restrict worship there. Of course there are scuffles because Palestinians resist when Israel flouts international law to impose colonial rule. The oppressed operate by the righteous belief that they have the right to resist oppression “by any means necessary.”

We can support Palestinian Intifada by honoring the economic & cultural boycott of Israel (BDS). Buy nothing with barcode beginning 729 & check every label on every product.

Our fullest solidarity with Palestinians & condolences to the families of the young men killed. May they Rest In Peace.