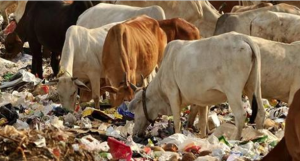 How much do you think it costs India every day to sustain the occupation of Kashmir? Several military bases, 700,000 troops must take billions better spent on social security which India does not provide the elderly & disabled. It could also be spent on schools, eliminating homelessness & child labor. Or it could be spent on cleaning up the numerous mountains of waste which are an environmental blight, a human health hazard, & where roaming cows feed on plastic.

No one mocks that Hindus hold cows as sacred. Because of the cow’s importance to human civilization, the cow is held sacred in many religious traditions. But if an animal is considered sacred in India–even more so than Muslim or Dalit lives–then one would think Hindutva nationalists would assure the highest standards of care for cows. Instead, the city of Lucknow in the state of Uttar Pradesh reports that 1,000 cows die extremely painful deaths every year due to plastic consumption. The chief veterinary officer said 20 to 25 cows are found dead on the streets every month from multiple organ failures caused by the clusters of rock solid plastic removed from their stomachs. Lucknow has a plastic ban which is apparently not enforced. Even if cows were not held sacred, this is an abomination.

There is a political economy to India’s occupation of Kashmir, a price paid by the working people & oppressed in India. Not the least of which is having their sons warped by serving as the agents of repression against Kashmiris.

(Photo of cows grazing on plastic from Times of India)