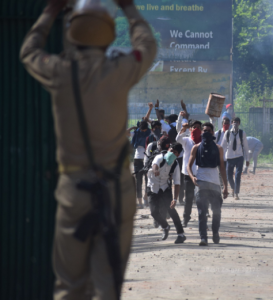 “The Indian military occupation of Kashmir makes monsters of us all. It allows Hindu chauvinists to target & victimize Muslims in India by holding them hostage to the freedom struggle being waged by Muslims in Kashmir. It’s all being stirred into a poisonous brew & administered intravenously, straight into our bloodstream.

At the heart of it all is a moral question. Does any government have the right to take away people’s liberty with military force?

–Arundhati Roy from “Azadi: The Only Thing Kashmiris Want.”
(Photo of student protests in Srinagar, May 2017 by Basit Zargar)