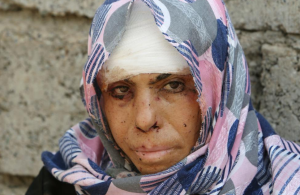 Have been trying to understand how antiwar forces can be so divided on Syria, with some using antiwar ardency to support Assad & Russian & other foreign military intervention on his behalf–even sending peace delegations to Russia as though it were the motherland of freedom & peace delegations to meet Assad as though he weren’t a murderous dictator.

Then there are those who oppose Assad’s dictatorship but are campaigning for a No Fly Zone imposed & enforced by the US (when historically a NFZ is an act of war) & campaigning for Clinton as the candidate most likely to take military action against Assad.

My conclusion is that the political character of Assad, or for that matter Putin, are of no consequence to those who support him & they either employ deceit or cognitive dissonance to deny the criminality of both—most importantly the bombing of civilians using chemical & other kinds of condemned weaponry like barrel bombs.

Those who oppose Assad but look to the US Pentagon for emancipation need to have their heads examined & their understanding of history & political loyalties interrogated.

The worst defenders of Assad & Russia are socialists who drag out volumes of quotes from the archives on colonialism citing dead socialist theoreticians to justify their positions. No one can deny their archival skills but regrettably they don’t exhibit an iota of understanding about the complexities of what is going on in Syria.

The heart of the differences is conflicting understanding of the military & strategic goals of the US in Syria, as well as in Iraq, Palestine, Pakistan, Afghanistan & the entire region. Supporters of Assad think it self-evident that the US is on a regime-change mission as in Iraq & Libya. If you’re paying any attention, it’s not self-evident at all. The only thing self-evident is that the US does not want powerful nation-states with dictators who are not house-trained by the Pentagon & with well-trained armies who can stand up to US hegemony.

So it’s true that regime change in Syria may well once have been a US military goal–& may be again. But the popular revolution against Assad which began in 2011 changed everything. Neither Assad nor the US & Russia can tolerate popular democratic movements which become beacons to suffering humanity around the world. The way Assad supporters deal with popular resistance against him is to deny it entirely & claim it’s all al-Qaeda.

One only need look at the US role in usurping the 2011 Egyptian democratic uprising against the military junta; at the massive US bombing of Yemen in 2011 & now the Saudi-led, UK & US-backed bombing to destroy the popular movement; at the Saudi, Pakistani, US, & UK role in destroying popular resistance in Bahrain. Not to mention the bankrolling of Israel against Palestinian resistance.

Eventually, the US may again prioritize regime change in Syria but for now its intention is to let Assad & Russia have military free rein to destroy every trace of popular revolution against Assad. That means the only possible antiwar response is not to cozy up to Assad & Putin but to stand firmly against all foreign intervention in Syria; to expose Assad’s political & war crimes; to give all possible assistance to the popular forces struggling to end dictatorship & war in Syria.

No to foreign military intervention in Syria must be the demand of international antiwar forces. No compromises with the Assad dictatorship.

This photo is a displaced Iraqi woman suffering emancipation US-style.