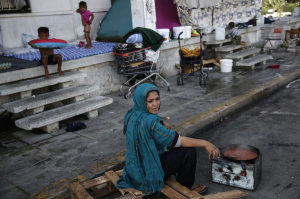 Makeshift tents on the premises of the old Athens airport & at rundown stadia from the 2004 Olympic games are EU accommodations for the estimated 60,000 refugees not yet deported to Turkey as part of the unsavory & criminal EU deal with that country. This family is living at the airport.

Since there’s a news blackout on the refugee crises, we don’t know what’s holding up the deportation process. The situation in Turkey with an attempted coup & the following crackdown by the Erdogan regime involving the incarceration of thousands without due process; Erdogan’s military forays against the Kurds & on the Syrian border: none of this makes Turkey a desirable place for relocation from the squalor of refugee camps in Greece.

There is a paperwork process involved where refugees can apply for asylum but most will be deported anyway & many nationalities, including Pakistanis & Afghans, are deported without the possibility of asylum.

Immigration is a human right. Asylum from war is mandated in international law. Open the damn borders.