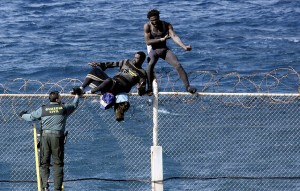 With their draconian new security law, Spain is now trying to legalize the brutality it displays toward African immigrants in Ceuta & Melilla, two Spanish enclaves on Morocco’s Mediterranean coast. Ceuta is the closer of the two to Spain, separated from the Iberian Peninsula by the Strait of Gibraltar.

Here two immigrants try to get over the 20-foot (6-meter) wall, topped with razor wire & with recently installed anti-climbing mesh, to enter Ceuta from Morocco. Frequently large groups of immigrants rush the fence as they’re attacked by Moroccan cops in the rear & Spanish cops trying to beat them back. They do this to increase the odds of some getting into Ceuta where by international law they are supposed to have due process rights as asylum seekers. A Spanish publication recently referred to them as “hordes of Sub-Saharans.” (Even in their grubby traveling clothes they’re a class act compared to the neoliberal barbarians who run Spain & the European Union.)

Fifty immigrants tried to scale the fence & you can see one young man here is caught in the razor wire. Many injuries are sustained that way. Only one of the group managed to get into Spain by jumping into the Mediterranean & swimming to the beach in Ceuta.

Almost exactly a year ago (Feb 6th), 15 immigrants drowned trying to swim from Morocco to Ceuta. They likely would have made it (even though Spain has constructed a breakwater to make it harder) but Spanish Civil Guards fired rubber bullets & teargas at them as they swam. Spanish authorities then tried to weasel out of culpability by claiming they drowned in Moroccan territorial waters. One Spanish official actually said the immigrants drowned not because they were being shot at but because they misjudged the high tide & couldn’t swim. With galling temerity the European Commission asked Spain to account for why it’s cops used rubber bullets on unarmed swimmers. Maybe if they wring an answer out of Spain the EU will account for its immigration policies which have caused the drowning deaths of thousands of immigrants trying to get into Europe from Africa & the Middle East.

Spanish authorities in collusion with Moroccan officials are actually trying to flout Spanish, EU, & international immigration law regarding right of asylum not only by the use of extreme violence against immigrants but by forcibly pushing those who enter Ceuta (& Melilla) back across the border without due process. Spanish immigration law prohibits summary expulsion, guarantees the right to legal counsel & an interpreter during deportation proceedings. If Spanish officials won’t obey the laws the Spanish people should pick them up by the ears & kick their asses to the curb. And it looks like they’re moving in that direction.

Our fullest solidarity with the immigrants wherever the hell they’re from. Immigration is a human right.