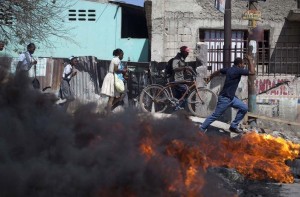 Bus drivers in Haiti ended their 2-day strike over fuel prices early after the Martelly regime agreed to lower the price of gasoline another notch. Unions representing the drivers claimed recent cuts to the cost of fuel were not steep enough given the drop in global oil prices. The regime recently lowered the price of gasoline by 25 cents to $4.50 a gallon & diesel by 20 cents to $3.55. As a result of the strike, they lowered the price another 25 cents. Capitalism is so irrational that comparisons are difficult but in the US gasoline is now under $2.00 a gallon. Does it take more than double that to get gasoline to Haiti or is some price gouging going on?

Many Haitians are too poor to own their own autos so workers & school children across the country were stranded without public transportation. The media concern for this inconvenience was so touching. All of the headlines rued the stranding & most of the photos showed pedestrians rushing to get past the barricades of burning tires set up by strikers at intersections. Media can really pour on poignant when they want to.

It’s just so curious that in concern for passengers getting to work & school media never mentioned that fuel prices affect the cost of housing; lower fuel prices are to everyone’s advantage. So those stranded passengers might not be as put out as media claims. There have been demonstrations all over the world for the past few years over fuel increases. Near revolutions in some countries. Even in places like Nigeria which is one of the biggest exporters of gasoline in the world.

Media compassion is a whole lot less touching when you know that after the 2010 earthquake price gouging on necessary items, including gasoline, water, food, was through the roof–in the midst of devastation. There wasn’t a fuel shortage in Port-au-Prince but prices tripled from pre-earthquake levels. The cost of a bus ticket out of town more than doubled. When media cries crocodile tears over the inconvenience suffered by Haitians they’re blowing smoke more rancid than that billowing off those tires.

One source reported the US embassy advised staff to bunker down during the strike due to the “large number of incidents of unrest in Port-au-Prince” & to avoid areas where protests were going on, saying protests in the city “can escalate quickly.” Knowing the US government is afraid of Haitian protesters? Now that’s priceless!

This photo is people passing tire barricade in Croix des Bouquets on the outskirts of Port-au-Prince.