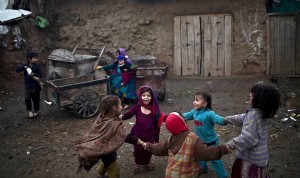 These little Afghan refugees in Pakistan playing the circle game known by children round the world are unaware of international negotiations about their fate taking place between the Afghan & Pakistan governments & the UN refugee agency (UNHCR). Since the Soviet war in Afghanistan in the 1980s until the US-NATO occupation in 2001 there were reportedly about 3 million Afghan refugees in Pakistan (& another 2 million in Iran). According to the UNHCR, since 2002 more than 5.8 million Afghan refugees have returned home, 4.7 million of them assisted by UNHCR petty cash. There are still (by UNHCR figures) 1.8 million Afghans living in Pakistan in slums & in refugee camps. As to why the figures don’t add up, your guess is as good as mine.

We are also repeatedly told by media (& the UN) that after the US-NATO occupation Afghanistan’s economy “quickly improved due to the flood of international aid.” And this claim gives us a clue as to why the figures don’t add up. We’re dealing in funny facts just like we’re dealing with funny money when it comes to all that vaunted humanitarian aid. Even the CIA publicly acknowledged in 2013 that living standards in Afghanistan are among the lowest in the world with massive shortages of housing, clean water, electricity, medical care, & jobs (according to the World Bank 35% of Afghans are unemployed). One in three Afghan children are malnourished; children under 5-years old have the highest rate of stunted growth in the world. Six months ago there were still nearly 700,000 internally displaced people in Afghanistan. That’s emancipation US-style.

Moving from squalid conditions in Pakistan back to a war zone & homelessness or refugee camps in Afghanistan does not appeal to the refugees so they have resisted appeals to move back. Rather than go back thousands have made desperate (& mostly hopeless) asylum appeals to Turkey & Germany. The UN–always the handmaiden of colonialism–has attempted to bribe them with grants of US $150 to relocate. Even by shameful World Bank standards of poverty, that’s a slap in the face. The Pakistani government has been more coercive, at one time refusing to renew the ID cards of registered refugees & treating them as undocumented immigrants. Of course Pakistan’s extensive military & bombing campaigns near the Afghan-Pakistan border have created millions of internally displaced Pakistanis so the country has more homeless people than it has refugee camps to accommodate them.

Recently Pakistan began forcibly relocating Afghan refugees to camps closer to the border with Afghanistan & issued ID cards for registered refugees only until the end of this year. One report says Pakistan took the issue of Afghan refugees more seriously after the Taliban attack in Peshawar in December 2014 even though the attack was claimed by Pakistani Taliban. Nevertheless, hundreds of Afghan refugees have been arrested & are still behind bars. It’s a classic case of scapegoating immigrants.

Once again, this is the face of emancipation US-style. This is the price paid for the US-NATO war. The Obama regime is attempting to thwart antiwar protest with a phony declaration that the war has ended. That wouldn’t be the worst lie he ever told. Get your placards ready for the spring antiwar protests: US out of Afghanistan! US out of Iraq!