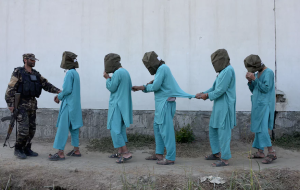 Media reports that these hooded prisoners of war captured in Jalalabad, Afghanistan are “suspected ISIS & Taliban fighters” being paraded to media at a press conference by Afghan security forces. The photo accompanies articles on the emergence of ISIS in Afghanistan.

Hooding as a torture technique began under the Gestapo in WWII. It was refined in secret CIA research between 1950 & 1962 which experimented with sensory deprivation like hooding, hallucinogenic drugs, electric shocks, sleep deprivation, & sexual humiliation. Out of this program, the CIA developed its interrogation manual to which it has added other techniques like waterboarding. Alfred McCoy has written an important book on this program titled “A Question of Torture: CIA Interrogation, from the Cold War to the War on Terror.”

When torture of Iraqi prisoners by US soldiers & CIA operatives at Abu Ghraib prison was exposed in 2004, McCoy explained that the techniques used were not due to psychological perversities of the soldiers involved (at least not solely) but were straight out of the CIA manual. The soldiers were not acting out psycho derangement but were instructed in the techniques.

After the public became aware & outraged at these monstrous practices, which are classified as war crimes, both at Abu Ghraib prison in Iraq & at Guantanamo Bay, the US military drafted a new field manual for interrogation procedures which it issued in 2006 under the Bush regime. It was mostly a dog & pony show to appease public outrage since what happens in US torture prisons stays in US torture prisons.

The manual–which is only for the US military & does not alter the CIA manual or practices–lays out what is not allowed in torture: waterboarding, military dogs to terrify or attack prisoners, deprivation of food or water, beatings, electric shock, burns or other forms of physical pain, forcing prisoners to be naked, perform sexual acts, or pose in a sexual manner, & hooding.

Afghan security forces are trained & armed by the US Pentagon. The only reason Afghan soldiers rather than US soldiers are parading these prisoners in hoods is because the US could be prosecuted for doing so under its own torture guidelines in the 2006 manual.

The US is entirely implicated in this incident which is a war crime. Because of “jihadist” war-mongering language, they think it can be justified for ISIS & Taliban prisoners. Wrong! The humane treatment of prisoners of war is international law from which neither the US nor Afghan military under US direction are exempt.