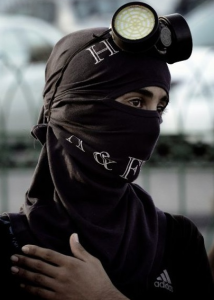 One of the most contentious issues on my Facebook wall is always the burqa. The number of times I’ve been called racist & patronizing for defending it as an issue of religious freedom & women’s rights is in triple digits now.

Feminism within Islam has a long, rich political history so Muslim women do not need others to straighten them out on the question of what to wear.

This exchange on the burqa between Samina Faiz & Muheeb Arbil says it about as directly & cogently as it can be said:

Samina Faiz: “It’s striking how so many anti-burka/niqab comments boil down to nothing more than ‘I don’t like it’ & ‘it makes me uncomfortable’ followed by an attempt to describe a wider social problem that doesn’t actually exist. Veiled women in the West aren’t harming anyone or impacting society negatively – there aren’t enough of them to do so even if they wanted to. In my experience they’re a tiny minority who live quiet blameless lives that revolve around their families. Hardly an existential threat to civilisation.

Wealthy hermits live their lives in secluded privacy without censure. Michael Jackson & his kids covered their faces in public for privacy, nuns wear antiquated religious garb… But the only beef politicians have is with veiled Muslim women who they want to save from themselves. It’s classic dog-whistle politics.”

Muheeb Arbil: “Everyone wants to save the Muslim woman. Some want to put the hijab on me and save me; some want to take hijab off me and save me; some want to bomb us and save me. Just give me a break man! I can save myself! I don’t need Western imperialism to save me or Western feminism riding on the coattails of Western imperialism to save me. I can save myself.”
Muheeb was quoting Uzma Shakir (Activist)
***
This portrait is of a woman activist in Bahrain during the 2011-2012 uprising led by women in burqas. If eyes are the window to the soul, you are looking at the soul of revolution.