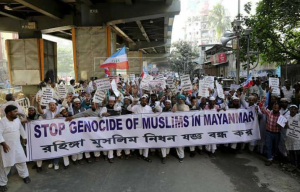 From the Facebook walls of Rohingya friends I’m learning there have been protest rallies in solidarity with Rohingya Muslims & against the Myanmar government in Malaysia, Australia, Bangladesh, Canada, Norway, India, South Africa, Indonesia, London, & at the UN headquarters in NYC.

Most rallies appear to be initiated by Rohingya refugees. That sure isn’t what the Myanmar government had in mind when they forced tens of thousands to flee for their lives.

It’s likely there have been rallies elsewhere & it would be really useful to list them here so we can see the emergence & spread of international solidarity which is decades overdue but never too late.