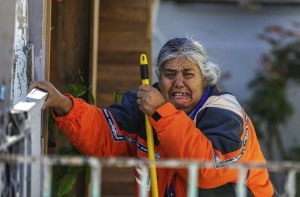 There is a specter haunting Europe & that is the racist persecution & scapegoating of Roma in every country. Racism is not just part of the matrix of militarism but essential to the strategy of “divide & conquer” to take the heat off the ruling elites & dump it on the most impoverished & powerless people in society. It’s a slippery slope that ends up in pogroms & concentration camps.

This woman is a Roma living in Halandri, a suburb of Athens, Greece, where seventy-four Roma families have lived in a slum compound since 1971 (43 years). The Greek government has been attempting for months to evict the residents for illegal occupation of land in defiance of Greek law granting ownership rights to anyone who possesses land for longer than 20 years. The government plan was to demolish the compound (likely for purposes of gentrification) & relocate the Roma community to Mount Patera near Megara, about 40 kilometers (25 miles) outside the city at an altitude of 750 meters (just less than half a mile) with freezing temperatures & no essentials like running water, electricity, santitation, or schools & health facilities, & the nearest road 15 kilometers (nearly 10 miles) away. Residents don’t want to be evicted from a place they’ve made home for 43 years; their kids go to school in the area, they all work nearby & they will have neither schools nor jobs in the remote mountain outside Athens.

An estimated 140,000 Greek Roma live in about 200 makeshift compounds. Reportedly the Greek government has received 12.5 euros for badly-needed infrastructure projects but only 10,000 euro are accounted for. Some municipal officials were prosecuted for financial corruption involving 1.3 million euros designated for infrastructure projects that never materialized. Forced & illegal relocations of Roma from urban compounds have gone on in Greece since about 2000. They generally involve police brutality & forced removal to remote, undesirable locations. It was referred to by one human rights official as “institutionalized apartheid”–& that’s as good a term as any. Earlier this year, a Roma representative wrote an open letter to Greek officials protesting these relocations, titled “Roma means human, not human garbage.”

Leaders of the Roma community have been litigating & negotiating with officials for months for a deferral to find a more suitable location than Mount Patera. Roma rights organizations have filed formal complaints against Greece under the European Social Charter mandating housing as a human right. They claim racism & discrimination against Roma & systemic violations of the right to adequate housing in Greece. There’s really no shortage of laws (under the UN, the European Union, & Greek legislation) protecting Roma but there are also no provisions for enforcing their rights against officials hell-bent on ignoring them.

Officials in Athens had no intention of postponing the eviction & yesterday gave the community a half-hour to clear out peacefully before they moved in riot cops & bulldozers. The Roma community responded by setting up road blocks on a main traffic artery in Athens, setting dumpsters & tires on fire to block riot cops from attacking them or bulldozers from moving in to demolish. They were no match against a superior military force. Again might trumps rights.

The future of humanity depends on a ferocious rejection of racist discrimination & social hatred. There is no way forward without solidarity with those persecuted for their identity. Without that political solidarity, it’s all downhill from here for all of us.