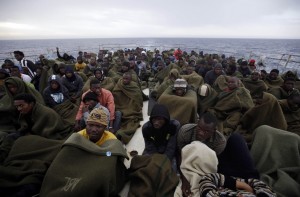 These young men are immigrants picked up by a Belgian naval vessel just off the Libyan coast in what the European Union (EU) euphemistically calls “a search & rescue mission” as part of naval operations to stop immigration from Africa. We should be grateful they still feel constrained from torpedoing immigrant boats since they did not hesitate for years to let thousands drown.

Libya is such a hell of a mess after the US-NATO war that the air force commander of one of Libya’s two governments warned the EU that vessels entering Libyan waters without permission would be hit with air strikes. But with two rival regimes & two opposing armies in Libya, who does the EU get permission from? The regime they recognized because they thought they could bargain with it? Or the other one? So much for emancipation US-NATO style!

The EU is hiding its assault on immigrants by claiming it’s to combat “people-traffickers”–as though it were a sophisticated smuggling operation rather than primarily fishermen. In order to operate in Libyan waters without permission, the EU has appealed to the UN for one of its Security Council resolutions–the kind it uses to legitimize all sorts of atrocities. But the UN can’t figure out which Libyan regime to let the EU bomb.

That means the EU for now feels some constraint & isn’t bombing the immigrants though it is trying to figure out a way to return them to Libya. The problem for both regimes in Libya is that they don’t want the immigrants launching from their shores. They have enough problems on their hands managing the mess of US-NATO emancipation.

Our fullest solidarity with the refugees. Immigration is a human right. Open the borders.