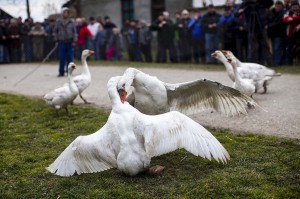 This photo from the annual World Gander Fighting Championship in Mokrin, Serbia is making media rounds today. Exposing the investigative impotence of modern journalism, every single article begins with the mantra ‘gander fights are considered part of Serbian folklore, are not extremely violent, & the animals do not get seriously hurt, apart from losing a few feathers.’ My ass! Do they actually intend to convince us that knuckleheads come from miles around to see ganders rough each other up a little bit!? They’re there to draw blood. From the geese! And for money!

Forget Serbian folklore! Anyone the least familiar with birds knows how complex avian societies are, how communal & dependent on each other in foraging, flight, migration, & companionship. There have been many wonderful documentaries on birds, most notably those by David Attenborough (we don’t use feudal titles like “Sir” on this wall). Geese have strong bonds with each other & it is often noted if one gets sick or wounded & has to drop out of flight formation, others will fall back with him/her until s/he is able to fly again or dies. That is only one of their qualities that makes them not just endearing but admirable. And people, under the guise of folklore, want to pervert that social quality into blood sport!?

Many use “cultural relativism” to excuse this kind of barbaric treatment of animals; they use the same damn thing for barbaric practices against women. Does gander fighting go a long way back in Serbian folklore? Who gives a rat’s ass? But it’s highly unlikely it goes back all that far since so many human societies were steeped in shamanic spirituality which respected & acknowledged animals as teachers & spirit guides & would not get a kick or earn a buck out of watching them kill each other. Shamanism is also a part of Serbian heritage.

Not that many decades ago, “The Great Chain of Being” was taught as the model of hierarchy between animals & humans–from rocks all the way up to angels. It was a silly feudal concoction to justify moochocracy & other disgraceful human practices. Now they use silly things like cultural relativism & folklore. That doesn’t mean cultural differences should be disrespected but that abuse should be recognized whatever language it speaks.