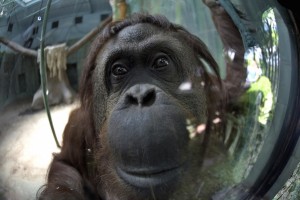 This sweet-faced 29-year-old orangutan named Sandra has been held in captivity in a Buenos Aires, Argentina zoo for 20 years. She is the subject of a historic & unprecedented legal ruling allowing her to be transferred to a sanctuary in Brazil more suitable to animal life than cement cages.

Argentina’s Association of Professional Lawyers for Animal Rights (AFADA) filed a habeas corpus writ against unlawful imprisonment at the Buenos Aires Zoo. The court ruled Sandra is “a nonhuman being that has certain rights & can enforce them through legal procedure” & granted her basic rights of life, freedom, & a premise of no harm either physically or psychologically. Previously animals have been regarded as things.

This is the first such ruling in the world & sets a legal precedent for the humane treatment of animals. It’s also the first wee step in the direction of outlawing zoos & animals in circuses. Some legal experts argue this ruling only applies to great apes (chimpanzees, gorillas, & orangutans) who share 96% of their genetic identity with human beings & are considered comparable in cognitive & emotional life. (That depends entirely on which human beings they’re being compared to. When compared to the US Congress, the great ape’s cognitive & emotional skills leave the senators in the dust.) It isn’t certain the legal experts are interpreting the ruling correctly but animal rights activists will surely use the precedent to push for the inclusion of all living beings to be treated with dignity & respect–& not as spectacle.

Hats off to Sandra’s attorney, Andrés Gil Domínguez, who argued animals suffer deep & serious harm from confinement. Buenos Aires Zoo officials have up to two weeks to issue an appeal. Let’s hope the tigers get them if they refuse to come to their senses.