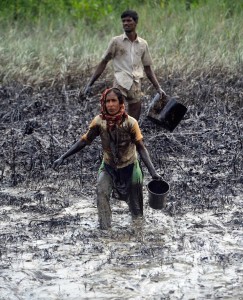 An estimated 350,000 liters (92,460 gallons) of oil spilled into the world’s largest mangrove forest in Bangladesh on December 9th after a tanker carrying furnace oil collided with another vessel. The spill area called the Sundarbans is an immense delta of islands threaded with creeks, channels, & canals with roughly one-third lying in India & two-thirds in Bangladesh. It is a haven for an extraordinary diversity of animals, including endangered species, & on both sides of the border there are densely populated villages.

In volume of oil spilled & acreage affected, it isn’t comparable to the 2010 BP oil spill in the Gulf of Mexico (210 million gallons in 68,000 square miles) but when adjusted for scale, it is just as catastrophic for the environment, residents, & wildlife which includes dolphins & endangered Bengal tigers.

Amir Hossain, chief forest ranger of the Sundarbans, admitted frankly to media they had no idea how to tackle the oil spill as it continues to spread along two rivers & inside the mangrove forest area. In place of a necessary industrial cleanup effort the government hired an oil company to get villagers to scoop up the spill with spoons, buckets, pans, sponges but they provide no protective gear or safety training. This may add farce & folly to catastrophe but it’s a replay of BP cleanup efforts in the Gulf & elsewhere.

The UN & US are sending experts to Bangladesh to assess the damage & provide assistance. But the truth of the matter is the oil companies will walk away from this scot-free just like they have all the other catastrophes they’ve created around the globe. If we don’t stop these oil companies from marauding, the entire planet will soon look like the Niger Delta.

We’ve got some work ahead of us. It isn’t the planet we’re saving; it’s the human race.

(Photo of villagers trying to scoop up 350,000 liters with sponges & buckets from AP)