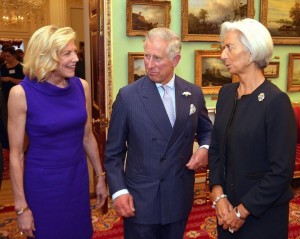 Hillary Clinton, whose career has taken her from legal counsel for Walmart to brokering sweatshops in Haiti & elsewhere, is now trying to position herself as a populist. She’s made millions in speaking fees, primarily for addressing corporations, & avoids accountability by turning fees over to the Clinton Foundation.

According to her speaking contract (obtained by a news agency in Utah when she spoke there), she controls the rights to videos & transcripts of her speeches. That would explain why none of her corporate speeches appear on YouTube & those which do are campaign speeches defending Black, women’s, immigrant rights–something she has never actually done in over 35 years of being a politician. Unless words now equal deeds. Because it’s damn hard to defend women’s rights & also promote Walmart & sweatshops. And the same goes for her vaunted role in children’s rights.

The Clintons are irredeemably corrupt, reflected in the finances of their Foundation. It appears many US power operatives are concerned this will boomerang on & discredit the office of US president. Otherwise we wouldn’t know much about it. But the Clintons & their powerful supporters are not going down without a fight. They’re calling out the big guns of capitalism to defend them & the first volley was fired yesterday by Lady Lynn Forester de Rothschild (phony-assed aristocratic title included for emphasis) in the Huntington Post in an article titled “Back From Africa With Eyes Wide Open.”

Lady Lynn isn’t much of a thinker; she’s an entrepreneur & a fixer for modern capitalism. So the article in defense of the Clinton Foundation charities in Africa is sentimental white savior crap. Rothschild has long connections to the Clintons as a functionary in the Clinton regime & a fundraiser for Hillary Clinton.

The question is, how do the Clintons expect to maintain a populist image when they have to draw on European aristocrats to defend them? This photo is Lady Lynn with Chuckles Windsor & Christine Lagarde of the IMF at the Conference on Inclusive Capitalism last May in England. Going to Africa for a few photo ops with Black children is an old trick of the British moochocracy which the Clintons are now using to clean up their image. Does it get more damning than that!?