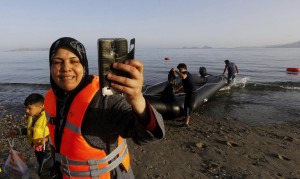 There aren’t many light moments in the immigration crises but humans will be humans. This Syrian refugee disembarking from the dinghy just crossed with her family from Turkey to the Greek island of Kos & in a moment of triumphalism is taking a selfie. Probably to confirm that she hasn’t drowned.

There’s little current information on what immigration policy the Greek government will pursue. The previous regime was barbaric with a barrier wall along the Turkish border, filthy overcrowded detention centers, assaults on immigrants & raids of their neighborhoods. The regime fomented xenophobia & ethnic nationalism–emboldening neo-Nazi extremists like the Golden Dawn party–in a country devastated by neoliberal scorched earth austerity policies.

In 2012 the regime instituted an anti-immigration strategy called Operation Xenios Zeus which unleashed police using ethnic profiling to accost thousands who looked “foreign” for identity checks. In the first seven months of its existence, police rounded up nearly 85,000 “foreigners” & took them to police stations to verify documents. Many dark-skinned tourists were caught in the dragnets. One human rights official said the number of people stopped & detained was “mind-boggling.” According to the UN refugee agency (UNHCR), 45,500 refugees were arrested by Greek police just in 2014.

Greece is the first line of European Union (EU) defense against immigrants entering Europe & it’s certain the regime colluded with the EU in its draconian immigration policies–particularly in the arduous process of applying for asylum. Greece had the lowest acceptance rate of asylum requests in the EU when for thousands of refugees safe deportation to their home countries was impossible & many remained locked up in stinking jails or destitute on the streets.

On its election in January 2015, SYRIZA promised different policies for immigrants. The SYRIZA minister for immigration announced reforms including the immediate release of unaccompanied minors & “their safe removal” (whatever that means); abolishing the compulsory 18-month detention of refugees & closing down all detention centers; granting Greek citizenship to second generation immigrants born in Greece; simplifying & expediting the asylum application process; ending deportations; & “disrupting” Operation Xenios Zeus. Disrupting Operation Xenios Zeus is of course, not enough; it needs to be dismantled. Otherwise none of the other reforms hold water.

Now that SYRIZA is bending to the EU on continuing austerity measures, it is certain beyond a shadow of a doubt the EU is putting the screws on Greece to maintain the immigration barbarisms of the former regime. The EU will not be militarily assaulting refugees trying to enter Spain & Italy while letting tens of thousands enter Greece & proceed on to other European countries because the immigration route would just shift to Greece. This suggests Greece may need more than a new parliament to address austerity & immigration; it more likely requires a social revolution beginning with SYRIZA mobilizing its people against the EU & IMF.

The EU can take their agreements & stuff them. Immigration is a human right. Open the borders.