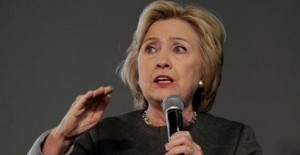 In a CNN interview, Clinton said:

“Hamas provokes Israel. They often pretend to have people in civilian garb acting as though they are civilians who are Hamas fighters. It’s a very different undertaking for Israel to target those who are targeting them. And I think Israel has had to defend itself, has a right to defend itself.”

One of the most expensive & elite educations in the world, all that vaunted foreign policy experience & this is the gibberish that groveling reduces you to. Most people who never finished high school could talk with more coherence. Because they’re not talking through their ass.

But she’s the lesser evil. Put that in your pipe & smoke it.