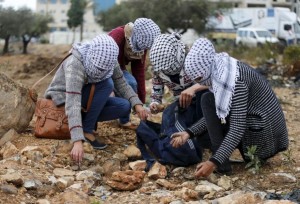 For the second time this month Amnesty International condemned Israel for a “clear pattern” of extrajudicial executions of Palestinians in occupied East Jerusalem & West Bank. Since October 1st up till yesterday, 64 Palestinians (mainly teens) have been shot dead by Israelis while eleven Israelis have allegedly (& questionably) been killed in “stabbings & shootings” by Palestinians. To explain the glaring disparity in fatalities, Israel reports that 37 of the Palestinians shot dead were “assailants armed mainly with knives” but hasn’t provided a shred of forensic evidence & buries the bodies in secret.

These young Palestinian activists are culling through their arsenal of rocks to use against one of the best-armed military arsenals in the world. The lying-assed media caption to the photo said “a month-long spate of stabbing attacks showed no signs of abating.”

In this day & age, it’s not possible to shut down the truth of Israeli ethnic cleansing but that doesn’t stop media from trying. To explain the cacophony between images of Israeli pogrom & headlines about Palestinian knifers, the public movement in solidarity with Palestinians must continue. There are men & women of good will around the globe who want to know the truth, who want to stand with justice.

Build BDS (barcode beginning 729) & do not be daunted by the escalation of Israeli hysteria. They bellow loudest who have no defenses left. It’s the death rattle of tyranny.