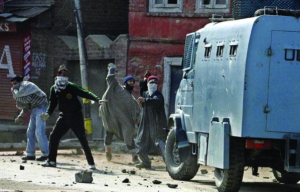 Last week, the head of the Indian army threatened Kashmiris who pour into the streets, often in the middle of the night, to interfere with counter-insurgency operations where military forces cordon off an area & begin aggressive home invasions & search operations to find & execute alleged militants.

The army is facing such fearless resistance from Kashmiris in the areas of the operations that he equated unarmed protesters, including women, & stone throwers with “jihadis” & terrorists & said they would be treated as such, including being fired on. The protesters have hampered operations so badly that contingents of paramilitary personnel will be deployed just to keep protesters away from the operation.

Shooting at unarmed protesters is hardly an innovation in the occupation of Kashmir. Thousands have been killed or permanently disabled by live ammunition, pellet guns, tear gas & the threat is unlikely to prevent Kashmiris from coming by the thousands to the defense of their youth. In fact, at a counter-insurgency operation after his threats, protesters showed up & in one instance the military called off the operation due to the resistance.

This is the powerful response of Kashmiri Wasim Khalid to the general’s threats:

“We should be thankful to the Indian Army Chief. He has accepted that people are coming out to protect the rebels. He accepted the current political movement is run by the public who are fighting for right to self determination. He accepted there is no difference between the man with a gun and the man without a gun. Both are same. He accepted Indian army is at war with Kashmir. The only new thing today was that he offically announced a war on Kashmiris. We have been waiting for this announcement from past 70 years. Till now, this war was under wraps of democracy, of “normalcy and peace,” of imposed leaders who were mere puppets of tourism, of sadhbhavna, of “development and progress” and so on. Today, he lifted the veil. We are at war with the India.

It happened only because of peoples movement on the ground. What Indian army cheif did actually was that he vented his frustration in the public. He has realized his clutches on the ground are not firm. He knows he has utilized all options. First time, I believe, the world’s third largest army is under pressure and helpless before the tiny oppressed people of Kashmir.

So if people tell you what 2016 uprising gave you; ask them we have defeated the morale of the third largest army of the world. They have realised that they are unwanted in Kashmir.”

Indian media reporting on the general’s threats only showed file photos of small groups of young stone-throwers when the protests terrifying the Indian army are large & also filled with women & men, not just youth.

(Photo from files is Kashmiri youth protesters from The Telegraph)