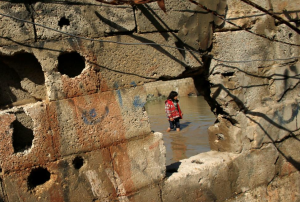 These are photos of the severe flooding in Gaza which is compounding problems caused by over a decade of Israeli bombing assaults. Many photos show people knee-deep in water in the middle of bomb-damaged living quarters like the little girl here. The other overview photo shows the number of living quarters without roofs. According to the UN, just in the 7-week Israeli bombing offensive in 2014, over 171,000 homes suffered damage; 19,000 of them were either completely destroyed or severely damaged. Schools, businesses, hospitals & clinics, water & sanitation facilities, Gaza’s only power plant, communication networks were also damaged or reduced to rubble.

Over one year later, 100,000 people still remained displaced living in prefabricated units, tents, makeshift shelters, or in the rubble of their homes. The UN reported that construction work had begun on half of the 19,000 completely destroyed or heavily damaged but by the end of 2015 only one had been completed. As of July 2016, only 3,000 homes were made habitable & 75,000 people were still without permanent shelter. Most have been unable to rebuild their homes because of the labyrinth of impediments put up by the Israeli blockade of Gaza.

Under the blockade, Israel monitors & controls all building materials (as well as medicines, foods, etc.) entering Gaza. Israel disallows many materials necessary for reconstruction, claiming they could be used by Hamas for military purposes or to rebuild the tunnels (which Israel destroyed in 2014) used to smuggle goods into Gaza which are banned under the blockade.

The World Bank monitors the international pledges to rebuild Gaza made at the Cairo conference in October 2014, the contributions are channeled through the Palestinian Authority & from there dispersed to the UN refugee agency, apparently to Israel for fuel, & elsewhere. It cannot be said the process has much transparency or accountability. But the World Bank reports that of the USD $3.5 billion pledged to reconstruction in Gaza, only about half has been received from the countries pledging–about $1.4 billion. How much, to which agencies, or even if that has been expended on reconstruction is not well accounted for. It’s likely grand larceny at the expense of the Palestinians is involved just like in such programs elsewhere, most egregiously in Afghanistan & Haiti.

The biggest problem according to the World Bank & UN is the defaults on pledges. One UN official claimed the resolution to reconstruction problems was reconciliation between the Palestinian factions of Hamas & Fatah & for the Palestinian Authority to resume control of Gaza. It’s beyond dispute that the biggest problem is Israeli carpet bombing of Gaza & the continuing blockade which denies necessities of life, including housing, & according to the UN will make Gaza uninhabitable in 2020.